Mics and pop filters, and preamps slide back into their boxes,
until next time.

They’ve been out, waiting for the “All Clear” from Mastering… just in case.

And now with the Master and the artwork set to meet at the replicators early next week, their job is finished for a time.

Once again our hearts overflow with gratitude…
Once again this project has taken on the pathos of the season slipping away, and the joyful anticipation of another on the horizon.
Once again God has proven Himself faithful through the hands and feet and prayers of people like you.

But this one’s a little bit different.
It’s a plea.

A dollar from every disc goes to a cause we love.
Just which, you’ll have to wait a wee tad longer to find out. 🙂

There is a Sanctuary

These days begin early, pass quickly, end when the sun is gone.
We move from strategy session to our intersecting orbits around home base, and mulch gets spread, and ditches get dug, and flowers get planted, and tasks disappear from our corporate checklist in the cloud.

Sunrise (literally) finds me on my knees in the cactus garden burying drip irritation for the moss roses.
By 10:00 I’ve moved on to a sunny spot in the lawn, me surrounded by bags of irrigation parts for the Anniversary Garden
At noon, it’s in the office with me. Answering the emails from early risers in Europe. By 2:00 I’m in full swing with the laundry room all torn apart, sanding and finishing cabinets. By 5:00 I’m back in the office, for more emails, more ProTools, more design concepts for the next album cover…

But I’m learning something…
I’ve been learning slowly over days blurring together. Over knees in gravel, knees in mulch, knees in grass wet from the morning’s artificial dew…

Days ago, I grunted out animated passion with every striking of the pick to gravel.
“I. Don’t. Just. Fight. For. Myself…“

Moments later, huge raindrops from a benign looking cloud drove me temporarily into the shed doorway, and I stood, arms folded, watching rain stream down.

Whenever I pause, wherever I pause…
Wherever my knees touch the ground,
there is a sanctuary.

June 25, 2012 / Seán / 10 Comments
“You have fifteen minutes.”
I cross the threshold and throw down carry-on and run for the shower to wash off the residue of airports and airplanes… And then I emerge to run around the house with cuffs unbuttoned, nibbling Rosemary and Olive Triscuits– my substitute for lunch.
But still this isn’t real.
When I left, my little grandmother was tired. But she was alive…
No longer.
. . . .

In this house, my mama is the Queen.
So my abuelita was the Queen Mother.
And sometime while I was guiding blind campers through the locker rooms at a swimming pool in Hellen Keller’s hometown in Alabama, she went to her rest.
So, Sabbath a few hours gone, I sat and watched the morning born out a window over the left wing.
And then landed in Albuquerque hours later, a few minutes before my cousin, inbound for the same reason.
But still, it wasn’t real.
It wasn’t real until I walked into the little church and saw her pretty face, all full of peace.
And I was washed over with gratitude…
Because though many call this nightfall, I think of it as just the moment before dawn.
Her night– al chained in by the blackness of a world increasingly impossible for her to understand–
That night is over.
So even while tears washed the piano keys, and I groaned for grace to keep going– happy that everyone was singing and my back was to them all…
Even when, after all the nearest and dearest of our friends had mingled tears with ours, wet our shoulders and let us wet theirs,
Even when they were gone and I knelt before the open casket gripping the side with one hand, and stroking her little, cold, white one with my other– shaking with sobs…
Even then, through tears I could only repeat one thing.
Thank You, Jesus…
Thank You.
Thank you for those little hands. Those hands that would reach around me from behind and suggest chords and harmonies when I was sitting at the piano pecking out compositions… That musical mastermind that always insisted I nail the progression without compromise, and would cheer and clap with glee when I did. She, with the equivalent of a Doctorate in music from the most prestigious conservatory in her homeland, the composure of unnumbered ballads; I, the upstart child that tried…
Thank You, Jesus.
For the gift she drove home for me, starting before I even knew my own name… By her endless creativity, her bottomless passion–
The gift of love for beautiful things.
Butterflies. And flower petals. And shimmering plumage. And harmonies just, just so.
And symmetry, and color, and shades and songs, and sunsets.
She’s why I’m drawn right into the heart of a flower the size of your headphone jack.
And she’s one of the great reasons I’m drawn right into the heart of God Whose idea beauty was [is!] in the first place…
Thank You, Jesus.
The Queen Mother sleeps.

Seeds.
And smiles.
And laughter on the wind.
And conversations that have nothing to do with gardening.
We sow little moments stitched together.
With our time fast running out.
And the dogs watch, and the sun turns us darker still…
And these are just little things. Just the seeds of this life.

But you know, if we take time to plant,
(–such a tiny part to play,)

Leaning on my rake midway down 170 feet of row, I tell my sister dear with a wink that

“If this is a hobby, it’s gotten a little out of hand.”
She straightens up, all smiles. Cocks her head a little and tells me in no uncertain terms
“This is no hobby. This is serious business.”

We Never Would Have Guessed…

We never would have guessed…
We’ve laughed, and cried, and struck palms to foreheads over the songs you love. All 83 of them.
They’ll never fit on 5 CDs, but we’re going to start.
In one month.
Start praying for us… 🙂

When God [Re]writes My Christmas Story

I believe in the God-scripted life. A script writer myself, I know that he who writes the script authors the outcome, and I believe in God-authored outcomes.

For the shepherd on the dark hillsides outside of Bethlehem, the appearance of not one, but countless angels from Heaven’s very choir was certainly just that: unexpected.

And for us, sitting in the car all night in a familiar town was that likewise. And being separated by miles and feet of snow when we most wanted to be together– this season, and father’s 60th birthday– certainly not in the plans.

But I have learned that through the unexpected God hones our expectancy towards Himself… And what is this season to remind us of, if not expectant waiting for the King? And even as space and time make loving hearts grow fonder, separation makes reunion more sweet.

So we glory in the gift of Jesus today, together. And thank Him that we have eyes to see, and ears to hear, and lives to live His script.

Wishing you all a most blessed and joyful Christmas! You are (each!) gifts to me this year… 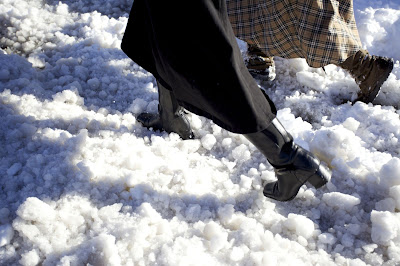 I awake early. I’ve slept for only a few hours, but I am charged…
I blink at a dark room, pause to pray. To consider. To remember–

I have no idea what time it is. I don’t check.
Instead, I count God’s mercies, and beg that He will keep us His… always.
That nothing will ever induce us to chose another life. That no success, no opportunity, no open door, no pain or loss, or suffering will distract us from His claims on this little family of mine.

Hours pass. I don’t know how many. The light of dawn finally glows in the east. I reach into the leather bag I set down by my bed at 11:00 last night, pull out a book, open to December 18.

“And we know that all things work together
for good to them that love God.“

I keep reading. But I’ve been fed already.

My mind wanders back over hours of prayers in the dark. There is only one condition in this verse before my eyes. “Love God.” For those who love God, one day (quite possibly much sooner than you think) all the darkness will be understood to be exactly what it really is– a gift.

“Who shall separate us from the love of Christ?
shall tribulation, or distress, or persecution,
or famine, or nakedness, or peril, or sword?. . .
Nay, in all these things we are more than conquerors
through Him that loved us.”

Spent hours this morning in a warm little Austrian living room, talking of Heaven… (While the clouds were deciding whether or not to cry.) Now my heart carries a peculiar little twinge.

I want to go Home…
But then I look out the window and remember where I am, and what I have left to do before it’s time to leave.
Heaven is my home, but earth is my workplace.
And it’s not yet time to go…
. . . . . . . . .
I live on a cursed planet, thanks to my first father’s ingratitude.
But I think the curse rests more heavily in some places than others.
This place is unreal. The pictures are pitiful.
I’ve never been to a place where the curse seems to rest more lightly.
Look, the sun just came out.

For lots of reasons. Not the least of which being huge windows wide open…
with no screens.

We’re safe, and snug, and thankful in Torre Pellice. More in the morning. 🙂

Mother’s Day at the Park

Yesterday was a day of rejoicing…
For one, Joshua turned 22. (More on that in another post.)
For another, Mother’s day was twice the fun with Grandma in the mix this year.
For another, this weekend marked 12 years since God turned our little world upside-down and landed us on these 5 acres we call Sweetwater…
And then, just when we thought the day couldn’t hold another drop, we got into the car(s) and headed off to Pie Town for a special community Mother’s Day picnic our little church was putting on.

It’s going to take a while for the blogs to catch up.

I guess we’ll work backwards. 🙂 Here’s just a part of the picnic.

75+ friends and neighbors later… We love Catron County, and the people that call it home.

Mother’s Day at the Park from Sean Nebblett on Vimeo.