All Is Enough [in Ninety-Six Words.]

February 6, 2014 / Seán / 2 Comments
Out of the blackness of night, and the wonder of the morning, this thought–
All of human fullness is emptiness. Still, we have the audacity of inviting God in, to inhabit some corner. Or even three corners.
The Holy God is far too great, far too deep, far too beautiful to fit in the corner.
Holy God looms too large to fit in all eight corners of three-dimensional infinity.
But then this miracle. When suddenly no space in my small heart is reserved unto myself; reserved for my use…
It is enough.
All becomes enough.

Bound to the Altar

See how it fumbles with soft leather strap, almost inept.
Hear broken sobs, from the given heart.
Watch him blink away tears so he can see what he’s doing–
See to bind his son. His promised son.

By some reflex my head turns in real life, eyes squinted shut. As if to say “I don’t want to watch this happen.”

Amazing love.
But you know what I find almost more amazing?
See how his hand takes those straps, steady and strong.
See how he binds himself, soothes the broken, himself blinking away tears.
This strong son. The promised one.

I pull out a second card. Because sometimes on sister’s birthday one card won’t say it all.

Four words– This morning I pondered with tears what it must take to stand like a rock, on a breaker out in the tide while the waves crash over. Like lighthouses do…

Because you, I, we… We’re out there, and the sandy shore from whence we’ve come is washing out, getting ever more distant. Carried away by churning foam while the water around gets deeper.

I mean, there’s the clinging, the scratching, the white-kunckled hold. But anemones and starfish have many more hands than we do. And none of them are permanent fixtures.

So it must be, that to stand rock-like, we need nothing less than to be bound to that rock by a power outside of our own. Greater than our own. Bound so firmly that neither fear nor fatigue can ever make us ask for release of reprieve.

Because it’s in the midst of the worst storms that the world most needs lighthouses…
Prisoner on the rock. …to the Rock.

di-ˌtər-mə-ˈnā-shən: firm or fixed intention to achieve a desired end…

Around the tree he goes. All business.
I stop to watch with mild amusement; my mind on other things.

Whether or not I can sense it, (I can’t) something was there. And his sense is strong enough that he won’t be easily put off. So he leaps and claws, and sniffs with this furious intensity, so excited he’s almost blind to his own opportunity…

I smell nothing, but I can see what he cannot.

I have his attention.
“You might be able to actually get up there. But you’d have to start from here. See?”

I point to a new spot on the ground, then tap anchor points up the tree to well above my eye level.

I frankly don’t expect him to try. But I underestimate his determination.
He runs to where my finger started; whirls around. He doesn’t even pause to assess the viability of my suggestion.

He makes this scrambling charge, and he climbs.

He climbs to the point of no return, and just when I am thinking I should have thought this through better before making the suggestion, he flies out of the tree, squirrel-like.
And then he does it again. The whole thing. Nose working overtime.

He does it four times. Until his own nose and I finally convince him that what was there isn’t any more.
Crazy dog.
Or is he?

We turn to go. He, on to the next conquest.
I, to my thoughts in the quiet woods.

“Determination: firm or fixed intention to achieve a desired end…”

Intention fueled by the recognition of a reality the rest of the world totally missed.

What if we were like that?
I mean, the holy nation. The peculiar people…
Fueled by a recognition of a reality the rest of the world totally missed…

Who says the impossible is… impossible?
Dogs can climb trees. Especially if someone points out the way.
I can prove it. 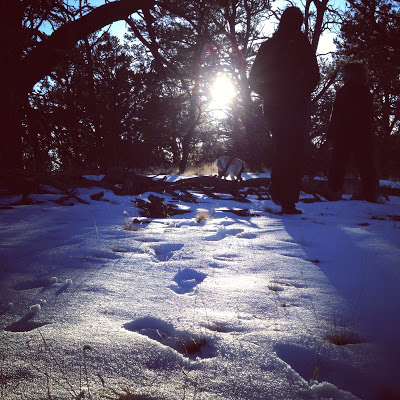 I know what it is to be hungry.

A little bit.
You know, where every sensation is heightened, (stub your toe and see.) and you carry with you an ache that won’t. go. away…
Hunger is both a gift, and a tragedy.
And normally, we go to great lengths to avoid it… 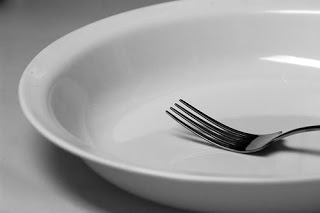 But to choose to be hungry…
We call that fasting.
To choose to carry the ache everywhere—
To embrace the heightened sensitivity to seemingly unrelated woe,
Could this be what it means to have fellowship with Christ in His sufferings?
And could it be that personal vulnerability, and brokenness, and weakness born of raw hunger are prerequisite to being a channel for life and liberty?
Could it be?

Pounding out (up, actually) mile number 4 yesterday, my brain tells me “You’re going to die. As in, now.”
But as Providence would have it, I run listening to one of my favorite audiobooks. And the girl reading through my workout playlist was at just the right spot on the page…
“Those who decline the struggle lose the strength and joy of victory.”
Well timed.
I laugh. Breathe. Run a bit faster.
Thanks Allie.

This morning I opened my Bible to Psalm 5. And my mind went back to yesterday, halfway home.
“Your Grace, disobedience of the slightest sort is high treason against the Crown.
And we are traitors. Deserving of death.
I do not remotely understand You.
I mean, I get it… But I cannot fathom.
I just can’t.
Normally, if mercy is strong enough to commute the death sentence for treason, it certainly does not restore the traitor to trust.
But time and time again, You pick your little ones up from the dirt, and trust…
Risk.
Again.
Multitude of mercies…
How long can You keep trusting traitors?”
The last question was rhetorical. But after a moment of silence, He saw fit to answer in a still, small voice with the distinct tones of a smile–
Until My blood runs out.   And that, my boy, won’t happen any time soon.
“But as for me, I will come into thy house in the
multitude of thy mercy, and in thy fear
will I worship toward thy holy temple.” Psalm 5:7

You Are What You Love

Blessed beyond understanding is the man or woman, boy or girl who resolutely refuses to walk the way of the world, whose ears are closed to the suggestions of fools, and who won’t sit down as long as there is a stand to be taken anywhere…

One cannot have the mind both to joyfully meditate, and jovially meddle with foolishness at the same time.

No more than one can be both a tree planted by rivers of waters, and chaff driven away on the wings of the wind.

You are what you love.

“…His leaf also shall not wither; and whatsoever he doeth shall prosper.”

September 22, 2011 / Seán / 6 Comments
“The expression of Christian character is not good doing, but God-likeness.

If the Spirit of God has transformed you within,

God’s life in us expresses itself as God’s life,

not as a human life trying to be godly.

–My Utmost for His Highest
Photos: ©Joshua Nebblett

“Grace for tomorrow you do not need.
You should feel that you have only to do with today.
Overcome for today; deny self for today; watch and pray for today; obtain victories in God for today.”

There I am, backed into a corner.

By my weakness.
My track record.
My sin.

It’s not the first time, either.

My heart pounds.
What is going on?

But then through the darkness of another failure kept fresh by my enemy’s brazen taunts, I remember:
I do not for one second believe that the power of darkness is greater than the power of Grace.

Not for one second.

Greater than me, yes.
But Grace abounds…

The audacity!
Audacity of Grace…

The Kingdom belongs to those who believe in the power of God’s dreams.
And keep believing.
Especially in dark corners.